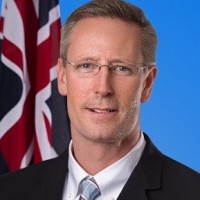 Minister van Holst Pellekaan was elected to Parliament as the Member for Stuart in 2010. He was promoted to the Shadow Cabinet in 2011 and has held the Energy and Mining portfolios since June 2014.

After his re-election at the 2018 State Election, he was sworn in as Minister for Energy and Mining in the Marshall Liberal Government.

Minister van Holst Pellekaan started his working life as a labourer before playing four seasons in the National Basketball League and at the same time gaining a Bachelor of Economics.  He then spent ten years with BP Australia before entering the small business sector as a shareholder and operator of Outback roadhouses for seven years.  This was followed by three years developing cycle tourism in the Southern Flinders Ranges immediately before entering Parliament.

Minister van Holst Pellekaan’s electorate extends from Kapunda at its southern end, all the way up to the NT border. It heads east to the NSW border. It includes the Mid North agricultural region, all of the Flinders Ranges and the vast north-east pastoral region surrounded by the Northern Territory, Queensland and New South Wales. The regional city of Port Augusta is its main population centre.