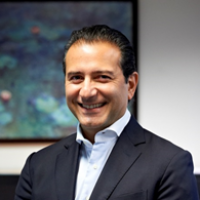 He has a degree in Financial Accounting from Kuwait University, and worked briefly in KPC-International Marketing before joining KPI as graduate trainee in 1993.

He soon moved to KPI’s London office where he undertook a series of financial roles. In 1999, Mr. Al-Mutawa was assigned to Q8-Italy organization where he progressed through various positions with increasing responsibility in finance, strategic planning and retail. In 2006, he was assigned as Country Manager for Q8-Spain, leading the company’s International Diesel Service (IDS) and Direct businesses in Spain.

In 2012, he was appointed as the Managing Director of Q8-North West Europe, responsible for Retail and Direct businesses within the BENELUX countries as well as IDS and Kuwait Petroleum Research & Technology (KPR&T), which also leads the company’s Centre for Excellence and Renewables initiatives.

In his previous role as Managing Director Q8-Italy before becoming Vice President, he led the Marketing and Manufacturing activities in Italy and also oversaw the activities of Q8-Spain and the Global Cards Business, which operates in 27 European countries.

In 2018, he was appointed as the Vice President – International Operations, later redesignated as Executive Vice President – Marketing.  He oversees the refining operations at Milazzo in Italy and marketing operations across North West Europe, Italy, Spain and Scandinavia for Retail, Direct Sales, Aviation, Global Cards and Lubricants business units and Q8-Research.