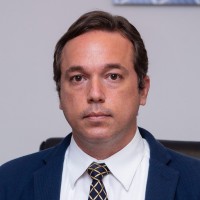 He has a degree in Law and Political Science, with a PhD in Administrative Law from the Complutense University of Madrid. He also holds a Master’s Degree in Energy Law from the Superior Institute of Energy (ISE) of Spain.

He has more than 10 years of experience advising governments and private companies on legal, regulatory and public policy issues in the energy sector.

He studied at the Institute for Social Development (INDES) from the Inter-American Development Bank (IDB) in Public Management results oriented for Development, and has a Diploma in Political Management and Governance from the George Washington University and the University of Panama. Knowledge that he reinforced in the Regional School of the United Nations Development Program (UNDP), on Public Policy Analysis from the Human Development perspective.

Within his public career, he served as Legal Advisor of ETESA and Legal Adviser officer in the Electricity Direction of the National Energy Secretariat during its organization period.

While  exercising his political life, he held the Presidency of the Energy and Telecommunications Commission of the National Bar Association for the period 2015-2017, and the Representation of large clients in the Operational Committee of the electricity market during the period 2016- 2018. He is a member of the Ibero-American Forum of Administrative Law, of the Latin American CAF Governance Network, as well as of the Network of Ibero-American Energy Experts of the CEDDET Foundation.

Founder and director of Enlex consultants, specialists in legal, regulatory and public policy aspects of the Panamanian energy sector with an emphasis on the electricity market.

Advisor, consultant and facilitator for private companies, public entities, NGOs and United Nations agencies. Speaker or moderator in various forums on law and energy, among other topics. He is the author of recognized publications, as well as multiple articles of socio-political opinion in newspapers and magazines with national circulation.

Author of “Fundamentals of Electrical Law”. Editorial Barrios & Barrios. 2017 After performing various tasks in public and private sectors, in July 2019 he assumed the responsibility of directing the Ministry of Energy. Among his main challenges is working for energy security and energy transition, promoting renewable energies and continuing to regulating the hydrocarbon sector, fundamental axes for the social and economic development of the country.

His mission is to conduct the country’s energy policy, within the current constitutional framework, to guarantee a competitive, sufficient, high-quality, economically viable and environmentally sustainable supply of energy resources for Panama´s development. The National Energy Secretariat attached to the Presidency of the Republic, has the mission of establishing and promoting the country’s Energy Policy to:

These objectives are in accordance with the National Development Plan of Panama and comply with the economic, competitive, and quality parameters.

A population with full access to energy supplies, at competitive prices, operating within an adequate legal and regulatory framework. Based on a strong drive for the efficient use of energy and technological research and development; with broad promotion of the use of alternative energy sources; and with security of supply.

Changes in an increasingly globalized world affected the direction of Panama’s economy, and made it necessary to modernize and strengthen the structure, to respond to new world trends and the demands of an increasingly participatory Panamanian society, which demands better services.

The restructuring process mainly sought the specialization of the National Energy Secretary in two (2) sectors: hydrocarbons and electricity, without losing sight of the importance and necessary role of the national energy policy formulation.

In 2011, strategies and actions for restructuring and resizing of the National Secretariat of Energy were established, which are specified in a flatter organizational structure and in accordance with the development policy of the National Government.

The new structure was established in Law No. 43 of April 25, 2011 (Official Gazette No. 26771 of Monday, April 25, 2011) which reorganizes the National Energy Secretary and dictates other provisions. (Repeals Law No. 52 of July 30, 2008). With this new structure and with the application of strategies of innovation, quality, modernization and optimization of resources, it is how the National Secretariat of Energy orients its work to design energy public policies.

Among the primary functions of the National Energy Secretary are: