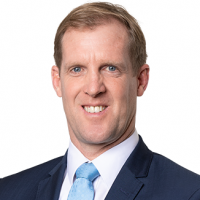 Stephen Patterson was elected to the South Australian House of Assembly as the Member for Morphett in 2018, along with Premier Steven Marshall’s Liberal Government. Stephen brings over 25 years of experience to the Parliament, with a wide-ranging professional background including business, local government and professional sport. Stephen was appointed Minister for Trade and Investment in July 2020. In this role, Stephen is focused on delivering the Marshall Liberal Government’s strong plan to recover the South Australian economy from the effects of the COVID-19 global pandemic. In Parliament, Stephen has served as the Presiding Member of the Environment, Resources and Development Committee and has also served on several other committees, including the Economics and Finance Committee. Directly prior to entering politics, Stephen worked with businesses in South Australia’s key growth sectors of space, defence and hi-tech, through the company he co-founded, Expeed Technology. Stephen represented his local community as the Mayor of Holdfast Bay Council from 2014 to 2018 and was a professional Australian rules footballer with Collingwood Football Club from 1995 to 2000. Stephen holds a Bachelor of Science (physics) and a Bachelor of Electrical & Electronic Engineering with 1st Class Honours from the University of Adelaide. Stephen is married to Tammy and together they have four children. Outside of his work as the Minister for Trade and Investment as well as the Member for Morphett, Stephen is an active member of the Glenelg Surf Life Saving Club and enjoys volunteering in a range of community groups with his family.