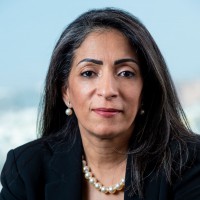 Over the past 23 years, Najla has worked in various onshore and offshore upstream Oil and Gas
operational roles as well as managerial and consultancy positions in Africa, Europe and the Middle East
at globally recognised companies including Vale, Schlumberger Business Consulting, IHS Energy, Shell
and Petroleum Development Oman (PDO). She possesses strong analytical and leadership skills with
track record in deriving and implementing strategies as well as business turnaround solutions.
Najla joined Oman Oil Company in 2013 and contributed her extensive experience in helping shape the
company’s strategic direction to fulfill the company’s objectives of maximizing value for Oman from its
resources. In 2016, Najla was appointed as Acting Executive Managing Director of Takamul Investment
Company, a wholly owned subsidiary of Oman Oil Company, which manages a number Oman Oil
Company’s Oman based investments. In 2020, Najla helped set up OQ’s Alternative Energy team and
was instrumental in transitioning it to a business line. She continues to be part of Alternative Energy
Business Line and is responsible for all Green Molecules Ventures. Under her leadership, OQAE has
announced 4 Green Hydrogen ventures in Oman so far with world renowned partners. These projects
should cumulatively contribute over 30 GW of renewable power to produce green hydrogen.
Najla has been a Board of Directors member of numerous companies under the OQ Group as well as
externally. She is currently the deputy chairperson for HSBC Oman. Najla holds a Bachelor of Science
degree with honours in Mathematics with Applied Mathematics/Mathematical Physics from Imperial
College, London. She also attained a Master of Science degree in Financial Management from the
University of London and participated in Schlumberger’s leadership programme at INSEAD, in France.